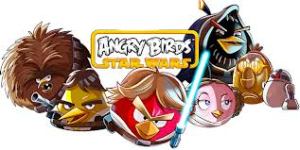 Angry Birds: Star Wars. Yes, that is correct. The most downloaded app has joined forces with the most successful film franchise to create the new mobile phone game Angry Birds Star Wars, set to release on November 8, 2012. ABC News reports…

“This is the best Angry Birds game we’ve ever done. It’s the best parts of Angry Birds with all new cutting-edge gameplay set in in a galaxy far, far away,” Rovio CMO Peter Vesterbacka said in a statement. “As a big ‘Star Wars’ fan myself, I’m really excited about this new universe. The Force is definitely strong with this one.”

While Rovio isn’t giving much away, its vice president of franchise development, Ville Heijari, dropped a few hints.

“Our teams have collaborated in creating the perfect mashup of Star Wars characters and Angry Birds characters,” Heijari said. “For instance, Red Bird will be Luke Skywalker. Other birds will be different characters from the ‘Star Wars’ universe and have special powers according to their Star Wars role.”

With the release of a new game, of course, comes the release of new toys, plush, and physical games. We will be getting all of those items here at As Seen on TV Web Store. We have carried Angry Birds plush items before with all the other game releases and have seen huge success. We are excited to be a part of such a historical event. Most items will be in stock mid-late November, perfect timing for the holidays and will be a guaranteed must-have for ages 4 and up this holiday season.

Securely Mounts to Dashboard or Windshield

A Pillow Pet That GLows!

Available in a Variety of Styles

Expands Up To 3 Times Its Length